Come out, see a lot of small art, buy some small art, and eat some pie!

I have a small collection of various octopus figurines made of plastic, glass, and rubber. A few of them have crept into the background of some of my paintings. The realistic one can be seen behind King Kong and its tentacles are curling into view beside the Creature from the Black Lagoon. There’s something so alien about the shape, movement, texture, and intelligence of octopuses (or octopi) that I’m totally fascinated by them.

Last month my family and I were in Plymouth, MA, where I’ve gone every summer my whole life. We went to one of the many kitschy gift shops on the waterfront and I found a basket full of these weird red rubber octopuses. They were straight out of the 80’s and had to have been sitting there in that store for the last 30 years untouched, no kid would have wanted one of these oddly designed creatures.

With that purchase I knew it was going to make it into the next painting along with the rest of the collection. As I started getting the octopuses together, I found a couple of rubber sharks, and remembered the countless times I had my parents buy me the same rubber shark toy souvenir year after year. It also reminded me of a restaurant we used go to in Plymouth called Souza’s Seafood.

Souza’s was the quintessential old school seaside restaurant. The ceiling was covered in a huge fishing net full of plastic lobsters, crabs, starfish, fish, shells, buoys, etc. it even had the huge tank full of lobsters at the entrance from which you could choose your dinner. As a kid it was magical. It was a place SpongeBob would have worked.

When I was thinking of a way to set up this array of fake sea creatures I was originally thinking I’d set them up in the sand at the beach but it didn’t feel right. There’s something inherently creepy about the ocean beneath the piers, docks, and jetties of the waterfront. You know there’s a ton of life down there on the bottom, the water is murky, at low tide you can see the bottom, and at high you know just how far over your head the water would be.

I was about to clean my fish tank when it dawned on me that it had just the right murkiness to hit that sweet spot for me. It’s a combination of creepy and silly. Like the fish tank in Pee-Wee’s playhouse plus the tale of Davy Jones’ locker.

So here it is. It was more challenging than I expected, but overall I’m satisfied. I hope you like it.

Notes: My 9 year old son Will came up with the perfect title. And the lobster is a fridge magnet souvenir that I stuck to the side of the tank. I’ve had that aquarium skull since I was fifteen, but didn’t get a fish tank until I was 30.

It’s been a couple of weeks past the one year anniversary of when I picked up a paintbrush again and started painting after a decade. What an incredible year it has been. I’ve learned so much, and met so many people all because I started painting again.

This spring I participated in the Belchertown Art Week and displayed work publicly for the first time since 2007. This summer “Smashed Cars” was in a group show at Gallery A3 in Amherst, MA. As of a couple of days ago my prints have gone on sale at Made It! Plymouth’s coolest waterfront art shop. I’ve sold some originals (I tend not to because I miss them when they’re gone) and a bunch of prints to a variety of interesting and really cool people who appreciate my paintings.

The most important thing I’ve learned through all of this, and it sounds obvious but it took me my whole life to really understand, is to do the thing you know you were meant to do. Don’t dress it up into something you’re not to try and appeal to more people (painting countless Fenway Park murals), or achieve a level of respect from some imagined elite class of critics (painting countless large abstract paintings), or force yourself into a mold that works for somebody else (graphic design, which led to web-design, which somehow led to CRM database management, and a whole host of other creative adjacent work) .

When you see happy people, that is success. It’s not the other way around. And when you see a happy successful person, it’s because they are doing what works for them. The reason it works for them, is that it’s true to them. What will work for you, is being true to your nature.

I’m finally able to see how truly listening to my own instincts about what I want to do moves me into the place I want to be, instead of listening to all of the people who’ve got other opinions about what I should be doing. That only gets you places they want to go. I get it now. I’ll do me, you do you, and I’ll be the first to celebrate and encourage you when you do!

Thanks for sticking around this long. I can’t wait to see what happens this year!

Today I am soft-launching the online store for my prints. There is a limited number of prints available for sale right now, with more to come soon. Eventually I’ll be making original paintings available for sale as well, but feel free to contact me if you are interested in an original now. 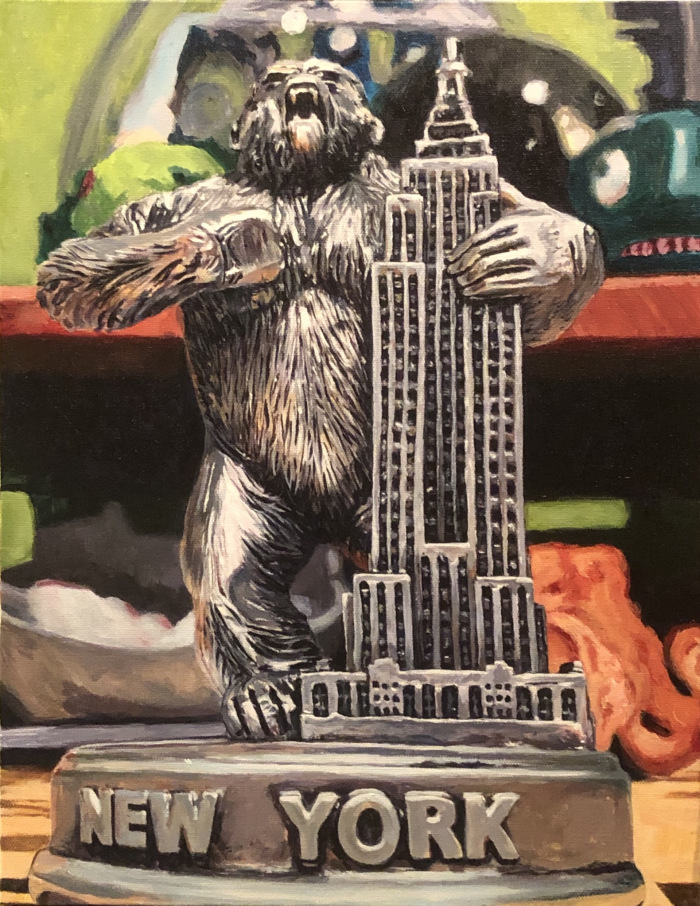 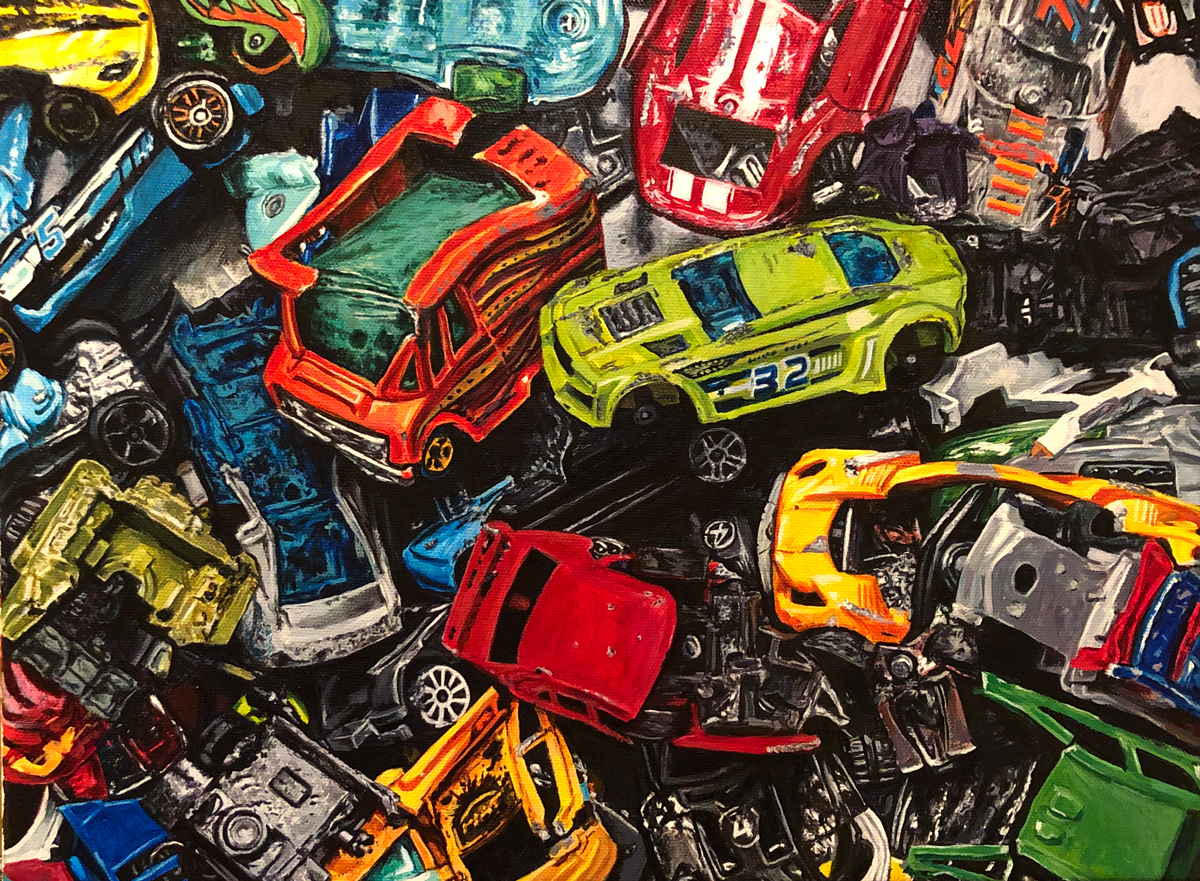 The Creature From The Black Lagoon has always been one of my favorite monster designs. I’ve had a translucent creature figure that I’ve saved for twenty years (from a 90’s Burger King promotion) hoping to do something with it one day besides display in our bathroom. I put it in the fish tank and shot about two hundred photos one day, but because of the translucency it was hard to read in the water so I never used it.

Last month I found an old Sea Monkey habitat in a cabinet (who doesn’t have one lying around?) and thought it would be fun to paint Sea Monkeys in some way. About a week later a Super7 started selling a smaller opaque creature figure online.

When the day came to start working out an idea for the next painting I realized what had to happen. In the background on the top right is a poster from this years Pintastic pinball expo, a mason jar with glow in the dark grow-in-water zombies on the left, another mason jar on the right with the original translucent creature figure inside, and an octopus on the lower left.

I’m thrilled to have had “Smashed Cars” selected for the 6th Annual Juried Show at Gallery A3, juried by Donnabell Casis The title of the show this year is Sky Bowl.

The inspiration for the title of our August show “Sky Bowl,” is a poem by Carl Sandburg.

King Kong – 14”x18” – acrylic on canvas. I bought this 3” King Kong souvenir years ago, outside Penn Station for way too much money. There’s a perfect level of kitschiness to it that’s always resonated with me.

Two weeks ago, after having finished the painting Smashed Cars, I decided to loosen things up and paint a painting in a single day instead of the usual few weeks.

I went almost the whole month of April without painting, and it was tough. Sometime in March my youngest son and his friend thought it would be fun to smash up a bunch of Hot Wheels cars and create stories for what happened to each car. I did this exact thing with my own cars and other toys when I was a kid. I still regret the destruction of a good amount of Transformers that I’d love to have back.

When they were finished I dumped the car carcasses in the kitchen sink and arranged them until I found a layout I liked. This is how this painting came to be.

Here is the time lapse video of the painting process.

On Monday May 6, I was at the Ludlow Country Club for the Silent No More Auction held by the Zonta Club of Quabog Valley. A framed giclee print of my painting, Truck with Insulation, sold at auction, along with a lot of other good stuff.

I had a great day displaying my work for Belchertow Art Week at the Belchertown United Church of Christ. It was wonderful to meet and talk to so many people about painting, art, the town, and life.

Available Now! Signed “Mission: Unknown” 16”x12” Print on Archival 100% cotton Hot Press paper.
Massive Signed Print Drop hitting my shop over the next few days!
Happy Star Wars Day! The last painting hasn’t ever been posted. The top was big head Han Solo, then I painted over him with small head Han Solo. They’re both goofy looking. Also, Han Shot first of course.
“Butterfly“ Happy Birthday to my love and inspiration! This painting of her is from a field trip our youngest son’s class took to @magicwingsma butterfly conservatory in 2019. It also happens to be where we got married in 2001. I knew as soon as I took the photo that it would be a painting one day. There’s not enough room to put into words how grateful I am to have her in my life and to be a part of hers. She brings joy and love to the world. And she has encouraged my painting from the beginning.
Happy Masters of the Universe Day! Prints available on my site!
A HUGE Thank You to @hopeandfeathersframing for doing an amazing job framing, hanging, and hosting my paintings. Another giant Thank You to everyone who made their way out to see it live, and supported a great local business, as well as me. Stay tuned for what’s next, I think it’s going to be super cool.
Loading Comments...
Comment
×